Yesterday I met cousin Melrose down at the Dallas County Museum on Main Street in Fordyce. We planned to discuss our upcoming presentation in August at the Clark County Historical Society meeting in Arkadelphia on our book, My Own Precious One. First, though, we went over ideas we had for the Smithsonian traveling exhibit the museum will host beginning in April 2017, Hometown Teams: How Sports Shape America. I wanted to go to the Sports Museum, across the street and at the end of the block, so we stepped out into the 90+ heat to walk over to it.

The Sports Museum is in a beautiful old building, formerly known as the People’s Store, a longtime fixture in downtown Fordyce. The original hardwood floors and soaring ceilings lend a stepping-back-in-time feeling, perfect for showcasing history. Melrose pointed out how the brick on the back wall was again chipping onto the staircase, and I texted photos of the wall from the outside and the inside to my brother, who works at an architectural firm in Little Rock and has experience dealing with these type problems. While we waited for his reply on how to address the issue, Melrose showed me the empty lot next door where a building once stood. The brick front facade was all that remained, but even that had fallen over during a storm earlier in the year. That space has so much potential, and we stood there, envisioning children playing games or watching demonstrations, or museum parties that would tie into the theme of the exhibit. We finally had enough of the heat and started walking back to the museum.

A man with a big voice, standing in the shade of an awning and talking to a friend, hailed Melrose, and we went over to talk to him about what Fordyce was going to get in the spring. He became very animated and was thrilled to hear about what could be a big draw for Main Street. He and his wife have businesses on the street, on both sides, and also own the now-empty space by the sports museum. About that time, his wife walked up and she took us down to the lot. We talked for a while about the plans they have for the lot – fixing it up and turning it into a wedding venue or party location – before returning to the sidewalk. We strolled along, talking until we reached their store on that side of the street. It’s a flea market, with several items on display in front of the shop. I idly looked at them as I made my way past the storefront, following Melrose. I glanced down at a wooden bench, covered by an old quilt. When I saw a name stitched in the middle of a block, I paused to look at it. “Look, Melrose, it’s a friendship quilt!” She has the ones that once belonged to her mother on display upstairs at the main museum.

Upon closer inspection, we saw other names and a few sounded familiar, so we picked it up and began looking in earnest. “Look! It’s Edith Smith, Uncle John’s wife! Oh, my word! There’s a Mrs. Nutt with a Martha Jean beside it – that means that’s Vivanaye! Martha Jean was her daughter who was my Home Ec teacher in high school!” We kept looking and marveling at all the names we knew. The woman called over to her husband, who had walked into the store. “She said this woman was her Home Ec teacher!” We all chuckled over how small the world is. Suddenly I saw in faded red thread an embroidered signature so familiar and dear to me. “That’s my grandmama!” Tears sprang to my eyes and my throat tightened. My sweet grandmother, Essie Smith, had been a part of this friendship quilt.

In the Jacinto community, as in many communities decades ago, women would be invited by friends and/or family to make a block with their names in the middle, to be sewn to all the other quilt blocks. A quilting bee would take place in the quilt-receiver’s home, and the women gathered together to stitch and talk, a welcome respite from their daily routines. I was reflecting on this as Melrose and I held the quilt between us when I looked down, and there it was. “Clora Smith” in block letters, embroidered with the same faded red thread as her mother’s. I pointed it out and told them, “There’s Mama.” By now, I was nearly overcome. We told the woman how my mother had been an expert quiltmaker and how that made finding a quilt with her name on it even more special. 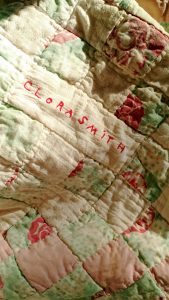 I looked up and asked, “How much is this quilt?” She didn’t know, she said, but she would ask her husband, who had been inside the store. As we folded the quilt, I looked at Melrose and quietly told her, “I’ve got to have this quilt.” Then just before I put it down, one last look and the trinity was completed. “Louise Mann” was stitched in black and anchoring a corner, two blocks down from my other grandmother. It was like the three of them had gathered together to say hello to me, in a message from heaven embroidered on an old quilt.

Shaking my head, nearly speechless, I waited for the price. The woman was kind enough to tell me to take it with me back to the museum and take pictures of it while she and her husband discussed the price. That’s what Melrose and I did, and we sat upstairs discussing the names and the people we knew from long ago.

Louise Mann moved to the Jacinto community in 1949 when she remarried after my grandfather died in 1946. My mother married Louise’s son in 1953. That meant the quilt had been made sometime between those years, making it well over 60 years old. I could recall the faces so easily when I read the names of some; others I knew only by name:

I had only a small amount of cash with me and had not brought a check when I came to Fordyce. Melrose said she could help if needed. Anxious to find out the price, knowing how much quilts sell for in other places, we found the couple at their other store, next to the main museum. They sat there a moment when I asked what they had decided. They didn’t speak right away and my heart fell. I just knew it was going to be something I could not justify spending, even for something so priceless as this quilt was to me. The wife said quietly, “$50.” I thought I had misheard her. “How much?” She smiled and said, “$50.” Melrose went to get her money.

I explained to this nice couple how this quilt had to have come from Jacinto. Wondering where it might have come from and how they had found it, we went back and forth on ideas. Finally, the woman asked if there was someone still alive from that community, probably in their 90’s, who was now in the nursing home. I thought a split-second and replied, yes, Vivanaye Nutt. Their faces lit up, and they told me that’s who it was. Vivanaye and her husband had been long-time, down-the-road neighbors of my grandmother and her husband and I had known her all of my life. She was the last survivor of the four and had continued living in the house in the big turn for many years after her husband had passed. When she went to the nursing home, apparently her things were disposed of, and the couple had procured this quilt. She told me a woman had come to the store just the day before, looking for a quilt to use, but this one wasn’t what she wanted. I told her it was because of Divine Providence because that quilt was meant to be mine. They laughed and said they guessed so. I reached down to hug the woman tightly, maybe a little too tightly. When you get a chance to hug someone who helped bring you a message from heaven, you hug them as hard as you can.

Melrose returned with the money and gave it to the woman. We walked away, me hugging my new old quilt to my chest, close to the heart that has these names embroidered on it. 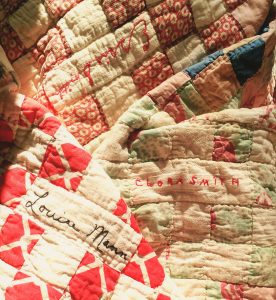 *** Please visit Main Street Flea Market in downtown Fordyce. The couple in this post are some of the nicest people you will ever meet. They have adopted Fordyce as their hometown and are making every effort to bring vibrancy back to that area. Their names are Loretta and Keith Cotton. Loretta is quiet but full of ideas and Keith has a megawatt smile with a voice to match. When you go, please tell them Sandra Parham Turner sent you. If they don’t know who you are talking about, say she’s the teary-eyed woman with the friendship quilt.

What is Turtlehull Publishing up to now?

Currently, I am editing a memoir written over 30 years ago by a retired Army Colonel. He and his wife rediscovered this manuscript not long ago and promptly asked if I would help them publish it privately for their family. The book is fascinating, a “coming of age” book, military-style. It spans a period of over 50 years, beginning in Little Rock in the late 1920’s and ending in Little Rock in the early 1980’s, with a full circle of the globe in between those years. The Colonel and his wife will decide later whether or not they want to make it available publicly. Stay tuned!

Also, I had someone inquire about the possibility of us having mutual family members and if I could help her find some information on them. I referred her to the book my mother, Clora Smith Parham, and her cousin, Melrose Smith Bagwell, compiled of family histories called The History of Jacinto 1849-2007. It was printed on copy paper and placed in binders. Since she will be purchasing one of the last available copies, I decided it was time for another project. I am planning to work with Melrose to update the book and publish it in a soft cover, with the proceeds donated to a worthy cause in Dallas County. If you have connections to Jacinto, contact me if you want to include your family’s history in the book.

I am going to move my personal blog, The Turtlehull, to this blog over the upcoming month of July. I hope you will take a look at it – either come back in a month, or go to http://theturtlehull.com/. Since I haven’t posted on it in over a year, I believe it’s time to merge the two and by doing that I hope to keep up with it better!

For now, follow me at one of the links at the bottom of this post, and click on the contact link above to let me know if Turtlehull Publishing can help you with your book!

Thanks for stopping by to see me –