This year, Senior Night coincided with Halloween. Most years, that would be of little significance to me, but this year, I had a Senior. Senior Night means getting to the football game an hour early to line up with your child and nearly fifty other students who are in fall activities, like band, football, or golf, with their parents, grandparents, or guardians, and take that long, measured walk across the football field. Your destination is the spot between the columns set up to emphasize that the person between it is the one whose name is being called over the loudspeaker, and the people accompanying them are the ones who can’t believe their baby will soon be walking off into the world without them by their side.

On October 31, 1996, I was six months’ pregnant and on a table at my obstetrician’s office with my husband on one side and the doctor on the other. We were all peering at the outlines of the baby, who was both within me and on the ultrasound screen, when the doctor said, “I know what it is, do you want to know?” “Yes!” we replied eagerly, anxiously, our eyes on the screen and our hands on the baby we now both could see and feel. “It’s a boy,” he said, and in a flicker of a heartbeat dreams of a Schuyler Rose and pink walls in the nursery disappeared. I swallowed a lump in my throat. “It’s Jacob London,” I said, smiling.  Later I would tell my mother what we had found out at our doctor visit. “And on Halloween!” I said, with a laugh. “Must mean he’s going to be a little monster,” she said. 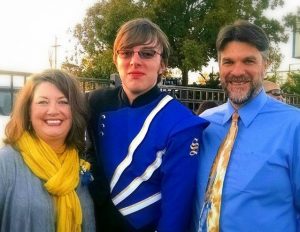 Eighteen years later, there we stood on Senior Night, on Halloween – my son, the marching band sousaphone player, with my husband on one side, and I on the other – inching our way up the track as names were called, watching from behind those in their two seconds in the spotlight. Waiting our turn to step onto the field, my tall son looks down at me and nudges me with his elbow, then holds up his arm for me to grasp. Three stops we made along our way across the turf. “Jacob Turner” was finally announced over the loudspeaker. At least I suppose that’s what was said. He and his dad had started forward, and I, with one hand inside my son’s elbow and the other on his arm, reluctantly followed a half step behind. I knew this was not graduation; that isn’t until a late May evening, some several months’ away. Then again, this moment had always seemed far enough away and yet, here we stood already between the columns, in the first of the final rounds of letting our baby go. “Escorted by Steven and Sandra Turner.” Swallow. Smile. Walk. Pause. Release.