The Only One to Say, Okay

I had a flashback the other day. It was the fall of 1986 when I was a freshman in college, and I was home for a visit. There in the front seat of my mom’s Chevrolet Caprice Classic, she and I were having yet another argument like mothers and daughters often do. I was driving, and she was on the passenger side as we traveled the road between Warren and Fordyce. The issue was, as usual, about a boyfriend of mine, the current one being a young man from Laredo, Texas, who was talking marriage. I don’t think I was ever really going to go through with it, but Mama drew the line in the sand. “If you think you’re going to get married and move down to Laredo, Texas, you’ve got another think coming!” At that moment we passed the city limit sign going into town and I shot back, “Well if you think I’m just going to marry somebody from Fordyce, Arkansas, you’re crazy!”

It turned out that Mama was crazy. I have to go back a few years before that fateful argument, to the spring of 1984 when I first met Steven Turner. Steven was a cute friend of my spring/summer of 1984 boyfriend. He had almost jet-black hair and these piercing, bright green-blue eyes that were warm and crinkly when he smiled. He was quiet, and I remember being slightly ill-at-ease with him at first because he was good-looking and I assumed he knew it. After awhile, though, I realized he didn’t, and we got along when we eventually did speak to each other. There was an assortment of young men who all hung around together in that small town, and I spent the summer of 1984 hanging around with them, more of a sidekick than a girlfriend. Steven was with my boyfriend and me on many of our dates, including what would be our last one in late September. It would be seven years before we would see each other again.

There were a few moments from that summer of 1984 that would stand out in the years to follow. Steven drove a little white truck for a time, and I remember getting in it with him on one occasion while Van Halen’s ‘Panama’ was on the radio. He sang along with David Lee Roth, and I would not hear that song again without Steven’s voice echoing in my head. Another time during that summer, Night Ranger’s ‘Sister Christian’ was released and when it came on the radio, Steven told me, “This is your song.” “Why do you say that?” I asked, and he shrugged and said, “I don’t know, it just is.” Once again, I never heard that song without it reminding me of that moment. Maybe I would have forgotten about him otherwise, I don’t know; but when that song came on the radio, I would immediately think, “Steven Turner said this was my song,” and I would listen intently to the words. Now and then, on a visit to Fordyce, I would see that little white truck in town and catch a glimpse of him, but I moved on to other parts of the state and my trips there were not as frequent.

November 30, 1991, the Saturday after Thanksgiving, would become the date of a turning point in my life. My then-boyfriend was visiting from out of state for the holidays, and we had driven to Pine Bluff, for me to find something to wear to a honky-tonk by the name of Bad Bob’s. I didn’t want to go. We didn’t get to see each other very often and going out to a club wasn’t how I wanted to spend our time together. But, that evening found me in a new red sweater and a black suede mini skirt, sitting in a booth across from my boyfriend. Loud country music played, and we watched people line dance as we talked about whatever it is two people talk about when they don’t know fate is about to walk in the door. I’d glance up now and then at people as they passed by us. One person walked by, and my eyes widened. “That’s Jimmy Stell!” Sure enough, it was Jimmy, who had not changed in the seven years since I’d last seen him that summer of 1984. I watched him as he passed, oblivious to me. Behind him was Timmy, his cousin, and a couple of guys I didn’t recognize. One of them had almost jet-black hair and piercing, bright green-blue eyes that scanned the room as they walked by us, and my jaw dropped. “OHMYGOSH that’s Steven Turner!” My heart sped up, and I couldn’t help but smile. The rest, as they say, is history.

The morning of April 15, 1995, came at 7:00 am for me. My best friend had spent the night for our last sleepover together at my parents, and we had gotten up to have breakfast. Daddy sat at the kitchen table as he ate his bowl of Raisin Bran, and his one piece of advice to me was, “You just need to remember that Steven is…..conservative.” I laughed and told him, “Daddy, trust me, I already know that!” It was one of those qualities I liked about my future husband. He knew where his money went, and he didn’t spend it to impress anybody, even me. We would be honeymooning on a small budget, driving through Louisiana, Mississippi, and Alabama, stopping wherever we wanted to before we returned the following week sometime.

My niece and flower girl had to be carried out to cry in the narthex. My best friend & maid of honor unknowingly stood on my cathedral-length train. My too-heavily embellished dress wouldn’t stay on my shoulders (“every time we bow our heads to pray, you yank it back up as best you can!” my oldest sister advised). The photographer moved the video camera so that instead of capturing the processional, the first 20 minutes of footage was of my grandma snoring in her wheelchair. These are some of the moments which stand out the clearest from that day.

A moment, in particular, I can recall vividly was when the music of the wedding processional swelled, the doors into the sanctuary were re-opened, and I looked up the aisle to see a handsome young man, with almost jet-black hair and piercing, bright green-blue eyes that lit up when they saw me. My father walked me down to him, held out my right hand, picked up my soon-to-be-husband’s left hand, and joined them together. We said our vows, exchanged our rings, and practically flew to the narthex, where the photographer captured the elation we felt as a husband and wife with a wedding behind us, as my brother stood in the background, holding his then-pacified daughter. 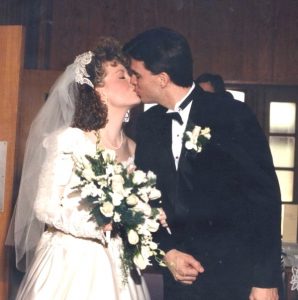 The honeymoon, like our marriage, would not be all bliss. In fact, it was a fairly accurate representation of what the next twenty years would be like – the joy, the anguish, the anger, the contentment. It has not been all hand-holding, as marriages rarely are. There have been times when one set of hands has clasped firmly around the other’s neck – figuratively speaking, of course. But there’s never been a time when one set of hands has reached out, that the other hasn’t grasped them and held on tightly. All those years ago, I never would have believed they’d belong to someone from Fordyce, Arkansas. I’m thankful my mama was crazy. 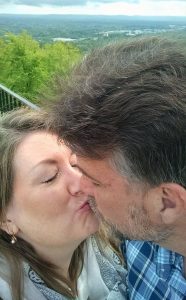 ****This post was written as a 20th-anniversary gift to my sweet husband, who I love with all of my heart. These photos were taken exactly 20 years apart, at almost exactly the same time – 2:35 pm. I am even wearing the same earrings, a gift from Steven on my 25th birthday many years ago.